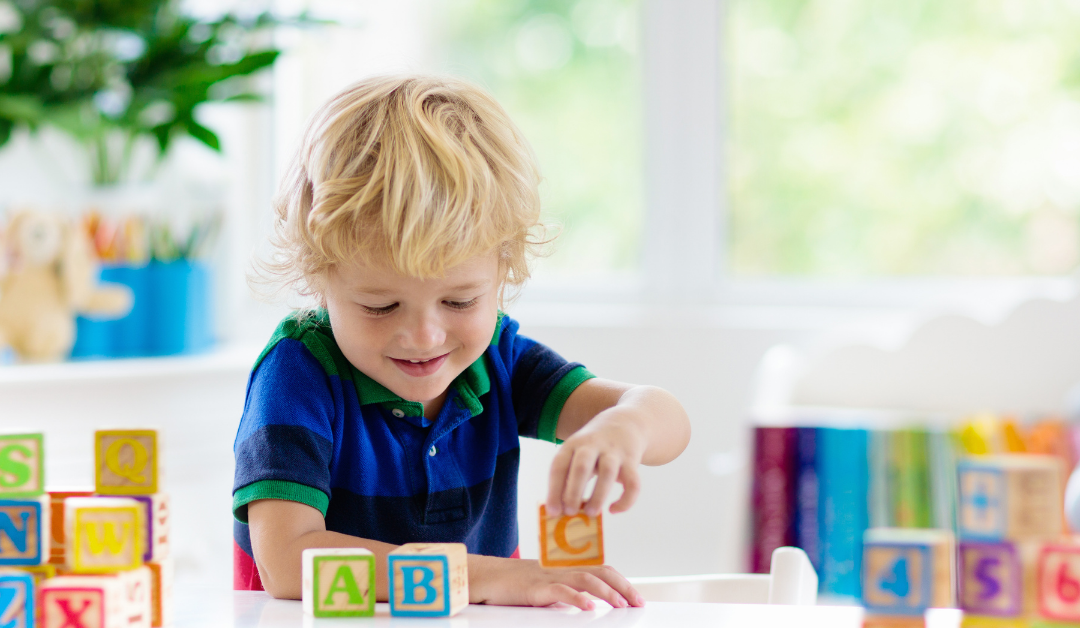 For the Nanny or Parent who seeks ways to enhance, extend, and empower language usage among their charges, a seemingly simple, yet quite sophisticated of tasks using the alphabet can be a lifesaver on long afternoons, car rides, or waiting for appointments. We begin our verbal journey in life with the alphabet; it is indeed the “alpha” or beginning of our attempt to put meaning to sounds, events, and experiences. We continue to use these same 26 letters for the “beta”, the next steps in reading and writing, to their fullest.

Decorate the learning space with a variety of alphabet charts, borders, blocks, cards, quilts, games, and even cloth. You will use them in the subsequent activities. Keep glue sticks, craft paper, small prizes, scented markers, alphabet cookie cutters, play clay, and other craft items handy. If you can find some small chalkboards and chalk, individual-sized, grab them!

Warm-up language and literacy by stimulating long –term memory using variations of “Pick a Letter” tasks. Use the chart below to configure unique tasks that tap into interests and ability levels. Feel free to mix up the task by selecting items from each category and blending in new ways. 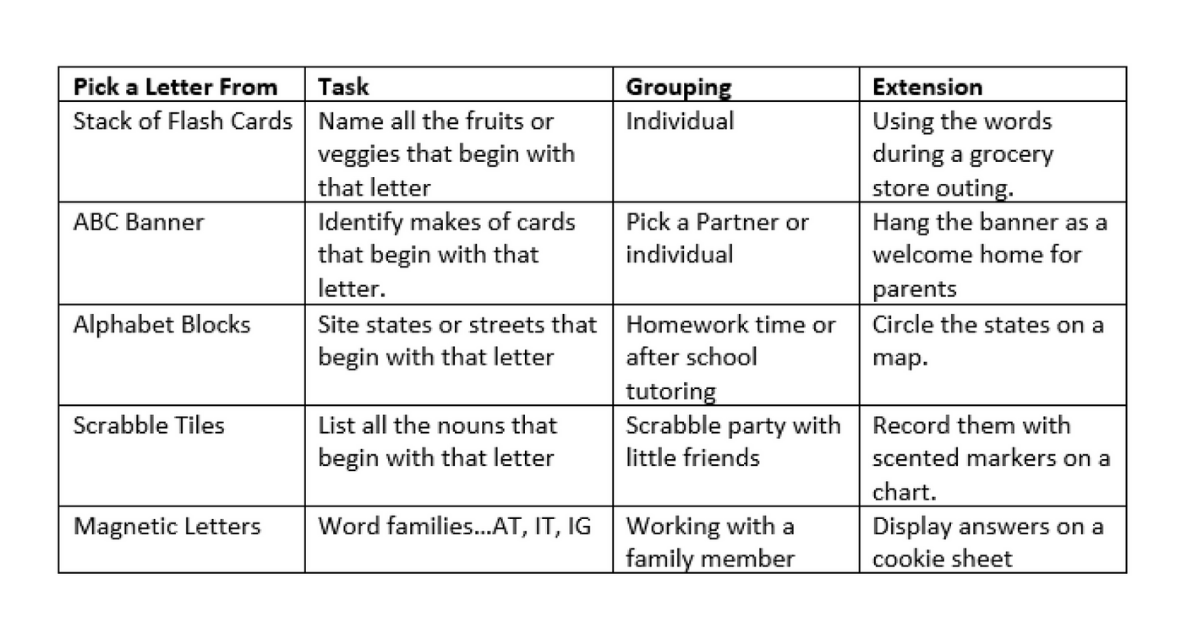 Nothing is more powerful than one’s own name. It is our history and our personal totem. It has meaning and memory, all good things for language stimulation. Use the letters on each child’s name to create acrostics to display and discuss. Depending on the ages of the children, this can be done individually or one at a time in a group learning. Write the name in a vertical line down the side of the paper or whiteboard and invite children to share words beginning with the letter that describes the unique attributes and dispositions of the child.

Give children review sheets and peppermints to enhance memory and alertness. Then, do a weekly challenge for children to say the alphabet “backwards” from memory.

For the creative spirits, use sparkly pens, calligraphy pens, and recycled holiday cards to set up a center in which artists can create personalized, monogrammed note cards.

Play the “What’s Next” Game

Stimulating auditory memory, a critical skill in language, speech, and fluency is enhanced by playing the simple “What’s Next” alphabet game. Simply form a circle and place alphabet tiles, blocks, or flashcards into a basket. Holding the basket (nanny) move around the circle in the middle and stop periodically in front of a child. Add music to this for more stimulation. The child chooses a letter and says….”What’s Next? And then supplies the answer. For example, if Linda pulled “S”….she would say “What’s Next? T is next. “

Pick up colorful, magnetic letters from a dollar store. Using tin trays, give each pair of children a paper cup of magnetic letters, randomly tossed in and have teams compete to create a word that “Sticks”.

This learning is taken from the formal IQ tests given to children to assess intellectual capacity for school. Using simple wooden alphabet blocks that you have assembled to make a word. Try “SCHOOL” for example. Show the child or pair of children the correct configuration, then knock it over, mix it up, and set an egg timer for 1 minute. Let them put the word back together in the correct order.

Create 26 cards on which there is a word that begins with each of the letters of the alphabet. Put a blank space IN FRONT of the word for children to fill in as a form of alliteration. Alliteration is a stylistic literary device in which a series of words has the same consonant. It is a good way to build fluency and flexibility in expressive language. For example:

Gather a variety of alphabet books from different cultures. Include vintage and new styles. Find different shapes, sizes, and perspectives. Give children time to explore the books and then have an “Alphabet Interview” period in which children share their impressions and comparisons of the books.

Serve Alphabet Soup for lunch and create place cards using alphabet soup pasta that has been spray painted gold and glued to cards.

For more information, check out these books and resources

Dr. Karges-Bone is a best-selling author and media influencer who specializes in bringing neuroscience to teachers in a brain friendly, engaging style. She holds two degrees in special education and has been writing about the effects of poverty and trauma on children's brains for over 15 years. She has trained thousands of teachers at the graduate and undergraduate levels and writes frequently for scholarly and popular journals. Her background in special education, use of humor, and real-world experiences with schools and families bring a sense of authenticity and trust to the lecture experience. 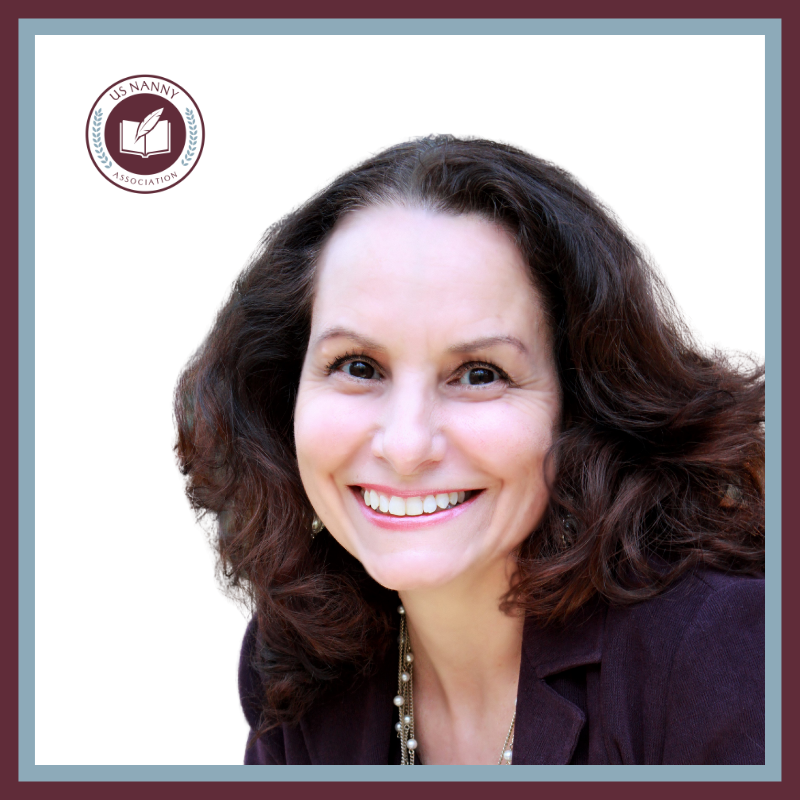